How I Got the Textbooks I Needed 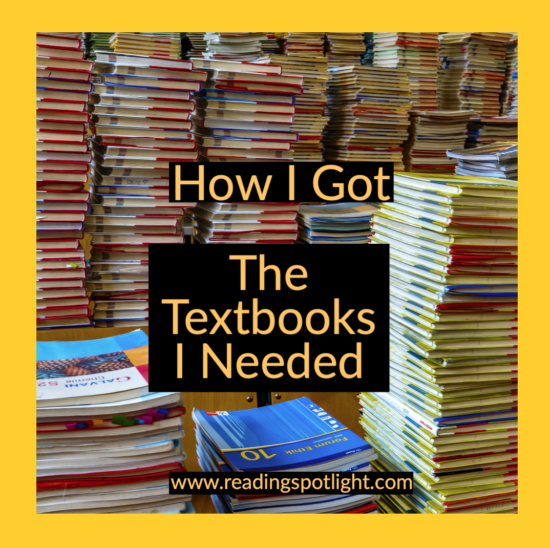 This is my story about how I obtained the textbooks I needed for my classes.

Knock. Knock. No, this is not a joke.

The knock at my classroom door was unusual. A person generally just came bounding in. Imagine my shock to find my principal AND my superintendent standing there, and they weren’t smiling. I was immediately certain that this visit was not to give me an award for being a great first year teacher. It was only October, after all.

Hired in the first year of a merger between two small, lower income public school districts, I admit to some naivete because my own education in a Catholic elementary and high school had appeared so uncomplicated. No one was hungry. Everyone had clean clothes. It seemed that all could read. Some kids were mischievous, at most. I spent my time in the top track, where each student was definitely encouraged and helped to do his or her best.

My present public school’s ten classes of ninth grade English classes were divided into five academic and five non-academic classes. As the new teacher in the school, I was assigned the non-academic students. The other, more experienced teacher taught the college-bound students. I accepted this situation gracefully. Quickly, however, I discovered how non-academic my kids were. I realized that very few of them could actually read the only textbook provided for the study of literature. No grammar book was provided.

When I asked the principal about this situation, he advised me to speak to the new Title I teacher about it. She replied to me that she did not have time to deal with the major reading problems in the school because she had already started a semester of vocabulary study with a few of my students, and she would be unable to add any others.

Left to my own wits, I decided to purchase a classroom set of the city newspaper for nine weeks. I knew it had a lower reading level than the one set of provided textbooks.  Of course, I learned early what all teachers eventually learn: you often have to spend your own money. I used the newspaper set for all five classes. We studied “Journalism 101” for factual story writing, sports stories, human interest stories, and the opinion pages. It was actually fun, and the sports pages were a big hit with my male dominated classes. We made charts and graphs, and we also studied some grammar, spelling, proofreading, and main idea with headlines. Not much actual literature, though. The newspapers were well-worn after each day. The few students who could read the newspaper fluently enough to be understood read the stories aloud to all of us.  Sometimes we cut out particularly interesting stories to work on for a different direction at a later date.

I also developed my own instructional worksheets concerning grammar, spelling, and the “business letter.” I copied them with the school mimeograph machine. I remember to this day the smell of the ditto fluid, and how annoyed I would be if I had to refill the machine.

I learned early how to develop my own enjoyable instructional materials for my classes.  One that might be of interest is to you is:

A Bundle of Grammar Crossword Puzzles

It seemed completely logical to me to combine all that the students had learned into a “project” of writing a letter to the editor on any subject they chose. Some letters were sent to the city paper, others to the local community paper. Of course, the students were aware that they did not have adequate instructional materials, and some of them wrote about it.

When I think hard about this situation, I am aware that I might have had an unconscious motive in these letters to the editor, but I do remember that it was more important to me that I not crush their nascent voices. They did write about all kinds of issues, and they were overjoyed when some of their letters were published in various newspapers.

NOW these two gentlemen at my door wanted to know why I sent the letters that made our school look “bad” to the community and to the taxpayers. I have lived my entire life by the motto that the truth will set you free. I told them, in my innocent, trusting voice, that I was sorry that the school looked bad, but the students were truthful and not provocative. I also explained my lesson design for the nine-week grading period. The simplicity of my answer seemed to confound them. Or was it my naivete?

They said very little in our quiet, two-minute conversation, but a week later my principal called me to his office and told me that I could purchase one set of lower reading level literature stories, and one set of grammar workbooks, in which the students were not allowed to write. Answers had to be written on separate notebook paper. Fair enough, I thought.

That is my story of how I got the textbooks that I needed.  In those days, teachers decided the curriculum. I am not sure if the public embarrassment made them decide to let me buy the texts, or if they didn’t want to discourage a highly-motivated, young teacher with lofty goals. I prefer the second reason.

And now you are probably wondering if I made tenure. That is a story for another time.